"There would be meat that had tumbled out on the floor, in the dirt and sawdust, where the workers had trampled and spit uncounted billions of consumption germs. There would be meat stored in great piles in rooms; and the water from leaky roofs would drip over it...There was no place for the men to wash their hands before they ate their dinner, and so they made a practice of washing them in the water that was to be ladled into the sausage. ...and cartload after cartload of it would be taken up and dumped into the hoppers with fresh meat, and sent out to the public's breakfast." – The Jungle by Upton Sinclair 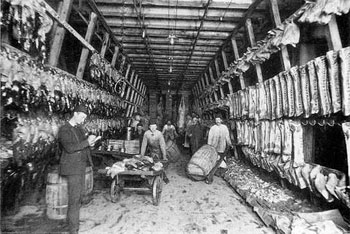 In 1906, a novel called, The Jungle, by Upton Sinclair sent a shockwave through the halls of the United States Congress. The book sensationally exposed the early 20th century's scams within Chicago's meatpacking industry and brought to light the worst of the food production industry.

Shortly after its publication, the Pure Food and Drug Act of 1906 passed with overwhelming governmental and public support. The Act helped make the need for research and regulation of food safety practices a nationwide priority.

In the century since the early food safety reform of Sinclair's time, we're now utilizing practices that have proven effective in food production, packing, shipping and restaurant environments.

HACCP (an acronym for Hazard Analysis and Critical Control Points) and commonly pronounced, "hassup," was developed by the Pillsbury Corporation, the National Aeronautic and Space Administration (NASA), the US Army and the US Air Force Space Laboratory Project Group, in an effort to come up with new food safety methodologies for the US space program in the 1960's.

A proven, scientifically based system, HACCP was designed to ensure the safe production and handling of food, and is considered by the FDA to be "the most effective and efficient way to ensure that food products are safe." (2001 FDA Food Code).

The program is based on proactive self-inspection as opposed to random, end-product testing. It provides a continuous, self-monitoring system for food handlers that allows for immediate corrective actions when product is potentially unsafe by failing to meet critical standards at predetermined control points. Because HACCP systems allow a health department to more effectively determine an establishment's food safety procedures, most local health departments now strongly recommend that foodservice operations use HACCP-type food safety systems in their operations.

In 1988, the National Advisory Committee on Microbiological Criteria for Foods (NACMCF) studied the original HACCP system to create a foundation for other organizations to develop HACCP systems of their own. The results are commonly referred to as "The Seven Principles." Those principles, which continue to be used today, include: conducting a hazard analysis, determining critical control points, establishing critical limits, enacting procedures to monitor CCP's, taking corrective action, establishing verification procedures, record keeping and documentation procedures.

Developing a HACCP system for a foodservice (or food processing) operation is not without its challenges. Multiple menu items, multiple stages in the flow of food, multiple pieces of equipment, and multiple food handlers are all challenges to establishing an effective yet efficient system. However, according to the FDA, "The development and implementation of HACCP programs is a reliable and responsible step to help ensure the safety of food offered for consumption."