Speed, or "response time," is a very important consideration when choosing a thermometer. Some thermometer technologies are faster than others, and depending on the application, additional seconds (or fractions of a second) can make all the difference.

Response time can be affected by many factors, including the position of the sensor relative to the substance being measured, the mass of the sensor itself, the speed of the processor doing the calculations, the length of the wiring between the sensor and the processor or the type of technology used. 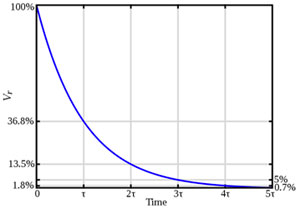 In technical catalogs and websites, including ThermoWorks.com, response time is often listed in increments called "time constants." It can be a little confusing, but one time constant is the time it takes for a given instrument to get to 63% of a full reading. To achieve a 100% practical equivalent, four more time constants are needed - for a total of (5) constants to get an accurate temperature.

If a technical spec table lists a given probe as having a time constant of 0.5 seconds, you can expect to get a full reading with that probe at 2.5 seconds (or five times the listed time constant). This is important to remember, so you are sure to compare apples to apples when considering instruments with different specifications or brands.

Commercial claims - like the one associated with the Super-Fast Thermapen (i.e. reads to within 1°F of final temperature of an ice bath within 3 seconds) are full-reading claims. The technical response time of the Thermapen is 0.6 seconds, or 3 seconds divided by five. Don't be misled by competitive thermometers that claim a "response time" of 3 seconds "like a Thermapen" when their actual time to a full reading is 15 seconds. Technical specs, like those on our probe selection pages, use time constants and will need to be multiplied by five to approximate the time for a full reading.

Another number that can be misleading is the "reading update rate." This number refers only to the frequency with which the digital processor of a thermometer samples the sensor. The Super-Fast Thermapen has an update rate of 0.5 seconds. That means that the digital display will show changes in the temperature as measured by the sensor every half second but it has nothing to do with the speed with which the sensor will adjust to the temperature of the material being measured.

Finally, as with accuracy, the "real" response time of a thermometer varies depending on the particular substance, and the range of temperatures being measured. Spec tables give outside limits, not exact speeds.

It's important to remember that - just as with accuracy - the total response time of a system (i.e. meter and probe) may well be the aggregate of the response times of the individual components (i.e. the meter response time plus the probe response time). That's one of the things that makes integrated systems like the Super-Fast Thermapen and the ThermoWorks FoodCheck appealing - the response times listed are composite.